I am not Lost 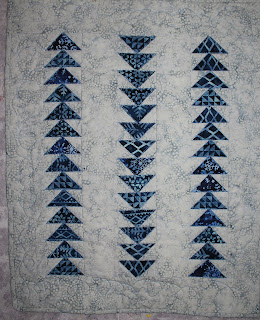 April's Island Batik project was to reinterpret an old pattern.  Flying Geese is one of the oldest patterns in use.  Folk lore has it that it was part of the Underground Railroad patterns and it has appeared  in many other quilts both traditional and modern.  However, it has never been a favourite of mine as I don't like making the geese.  I have tried a number of methods and they all produce good results but I still don't like making them.
I recently bought a book by Jo Morton and this little wall hanging was in it.  I used her method for making the geese and my wonderful Island Batik fabrics.  I still don't think FG will be one of my favourites but the quilt went together quickly.  My modern interpretation was to reverse one row and to add machine embroidery. I used a medium blue Masterpiece thread from Superior for the embroidery and quilting. 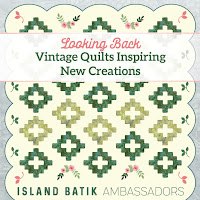 I have named this little quilt: I am Not Lost.  I Don't Need to Look at the Map.
Blessings,
Posted by Backwoods Quilter at 7:44 PM

Backwoods Quilter
I am happily married to a wonderful and understanding man. He is especially patient with the fact that I am a loner. I love being in my quilt room, listening to classical music and creating. My faith is very important to me and I try to put God first in all I do and say.

My Quilts Are For Sale