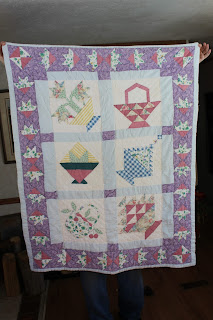 This lovely little hanging was given to me by a friend.  It is hand quilted and machine pieced.  I love older quilts and will find this one a new and loving home.

Our snow started to melt a bit today but not enough to make it noticeable.  It was however, soft and slippery so when hubby came home from doing some shopping, he got stuck in the driveway while trying to turn around.  It took the two of us a bit of time to get the vehicle moving again but it is now in the parking area.  My own vehicle is still hidden under a very deep covering of snow.  I need to get her dug out and started.

Hope everyone is getting ready to a good weekend.  Don't forget to peak outside to see the snow moon,

Posted by Backwoods Quilter at 7:30 PM No comments: 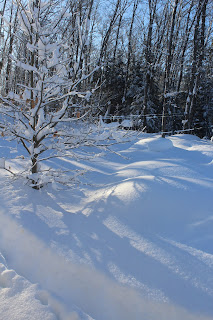 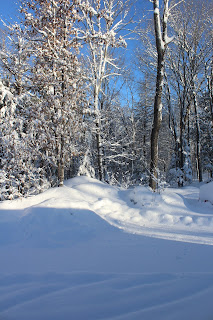 We had over a foot of snow fall yesterday.  Our driveway was impassable and we couldn't get out until is was plowed today.  We thought the hydro might go out because of the weight of the snow on the trees but all was good.

This morning we woke to blue skies and sunshine and it has been beautiful all day.  We did some shoveling but have to do more tomorrow just so the one vehicle can get into the parking area.  Also need to remove some snow along Heidi's path so isn't trying to pee on snow that is higher than she is.

I got another quilt loaded today.  This one shouldn't take long to do as it isn't full sized.

One of my fabric catalogues arrived today and there are a couple of great patterns that I would like to get but I won't.  It is going to take me most of the year getting the tops finished that are waiting hopefully in my WIP drawer.

Posted by Backwoods Quilter at 7:18 PM No comments:

Maple Syrup Time? Not This Year.

I finally finished the quilt that was on my frame.  It is the first time I have done ruler work and it didn't turn out too badly.  I definitely need a new ruler base and a lot more practice.  Tomorrow, I will load another customer quilt.  This is the third one I have done for her and everyone is the same.  She is a really fan of the Little Prince story and is doing quilts for various beds.  This one, if I remember correctly, is a single so it shouldn't take long.

I have been watching more television than normal so I am going to start knitting a loose tunic top for myself.  We found a number of dog rescue and vet shows and have been watching them regularly.  They can be quite heart breaking but I love seeing how the animals survive the cruelty of humans.

I have been working on a pattern for reusable panty liners and have come up with one that works.  The finished product will be sent to third world countries were such items are either not available or very expensive.

We have been getting light but day long snow falls for the fast few days and now we are due a heavier one.  On the bright side, the days are getting warmer and longer.  I had a pop up on my Facebook page that reminded me that hubby was making maple syrup on this day in 2017.  Not this year.

Posted by Backwoods Quilter at 7:40 PM No comments:

After a few days of very cold weather, it  warmed up a bit and then snowed.  After a slow start, we are getting a 'real' winter.

Hubby had a bit of a mishap today.  He was at a friends picking up some donated wood, caught his foot in the toboggan rope and had a bad fall.  Unfortunately, he landed on the same hip where he had replacement surgery a few years ago.  It doesn't appear that he did any long term damage but he is going to have a nice bruise.  He usually makes supper on Monday but I took over which was fair as he had to do the same for me on Friday.  I took Heidi to the vet for her shots that morning and, as usual, she had a reaction.  I got her up on the couch with me and cuddled under a quilt until early evening when she seemed to feel better.

When I was returning from the vet, I stopped into our art centre where a friend had left me some quilts.  One of them is a beautiful pieced lone star.  I will have to take a photo of it.  It is also hand quilted.  There was another smaller finished quilt and some tops so there isn't any danger of running out of things to do.  These will be completed and donated to a local women's shelter.

This photo is a hanging I did a number of years ago.  The birds are printed blocks  and I added a border and sashing of 1 inch squares.  The second border is also an inch wide and the last one is four inches.  As you can see, I have it handing on a door. 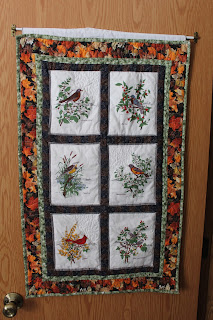 Blessings,
Posted by Backwoods Quilter at 7:44 PM No comments:

Those of you who live in Central Ontario will have experienced a nasty snow storm this past weekend.  We had an accumulation of about a foot and a half of fresh snow which arrived with white out conditions.  I was glad we didn't have to go anywhere.  I did have a medical appointment on Sunday but cancelled it as I wasn't feeling well.  That, given the weather turned out to be a blessing.  We still have some shovelling to do but, thanks to our regular plow guy and a neighbour who cleared a path to the chicken coup, we are in good shape.

We had to do some shopping today and when we got to the store, I noticed some new changes.  The one store everyone waited in on long line for their turn at a checkout.  I almost left but an employee told me that it was moving quickly.  And it was.  The second store had a different change.  I always take my own bags to it as it has the proper counter space and I get my husband to join me so he can pack.  That way it doesn't take a lot of time and hold up other customers.  This time we weren't allowed to put our bags on the counter and the clerk suggested hubby get a second cart so he could keep the bags there for loading.

A minor inconvenience but another step toward keeping everyone safe.

I was really pleased to hear a lady that had followed me into the store thanking all the staff.  We need to remember to do that.  They are bearing the brunt of everyone's frustration and worry.  A few words of thanks can make all the difference to them, 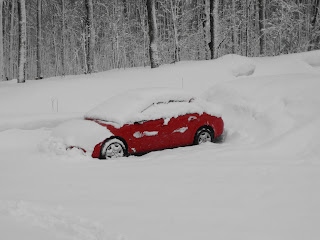 Posted by Backwoods Quilter at 8:38 PM No comments:

Judy mentioned eating black bean brownies as an addition to my strange ingredients in foods comment.  I think that would probably give a bit of a chocolate taste.  I made black bean burgers and they were good but more than I needed.

All my sewing machines decided today was a good one for a vacation.  I had thread problems with both of them.  It took a bit of twiddling and fussing but they are both working again.  I have another gift almost done and the quilt on the frame only needs 3 more passes and then I just have the side borders to do.  They are being done separately because of the different ruler design.

Heidi and I went for an extra long walk today as the weather was really nice.  I am not sure what the temperature is but when I did a bit of shoveling and dog dropping removal after the walk, I didn't need my gloves.  It has been a fairly mild winter this year without a lot of snow.  I wonder if we will get an early spring? 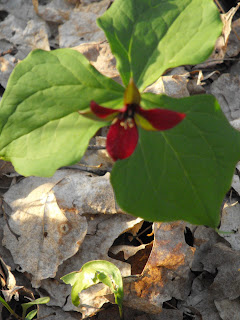 I have been working on Christmas gifts the past few days.  These aren't for next year but rather for the season past.  Every year, some quilting friends and I get together for lunch, some laughs and to exchange gifts.  This past Christmas we postponed our exchange because of the virus and other ongoing concerns.  Of course, knowing I had lots of time meant I didn't do anything despite already had made a note of what I wanted to make.  I should be finished this week and then we can decide when and where we can safely meet.

I have been giving my new stove a good work out.  This Saturday, I made a couple of dozen pumpkin muffins and two loaves of baked bean bread.  The latter was from a friend and I viewed it with some skepticism.  Using unusual ingredients has become popular lately.  I make tomato jam and chickpea muffins among other things.  I was surprised at how tasting the bread was.  The recipe said it was make three loaves but I only got two as gluten free flour is less dense.  I also made a couple of other changes including reducing the sugar.

Backwoods Quilter
I am happily married to a wonderful and understanding man. He is especially patient with the fact that I am a loner. I love being in my quilt room, listening to classical music and creating. My faith is very important to me and I try to put God first in all I do and say.

My Quilts Are For Sale